I saw this Sammie on Pinterest and knew I had to have one. Perfect timing my hubby had smoked a Pork Butt on the “Green Egg” a few weeks ago and I had leftovers in the freezer. The recipe I saw called for Shredded Beef so you could use either one.

Mac-n-Cheese I used this recipe

I made the Mac-n-Cheese and placed it in this bread pan. Let it cool, then sliced out wedges to put on my Sammie’s. It held together great. 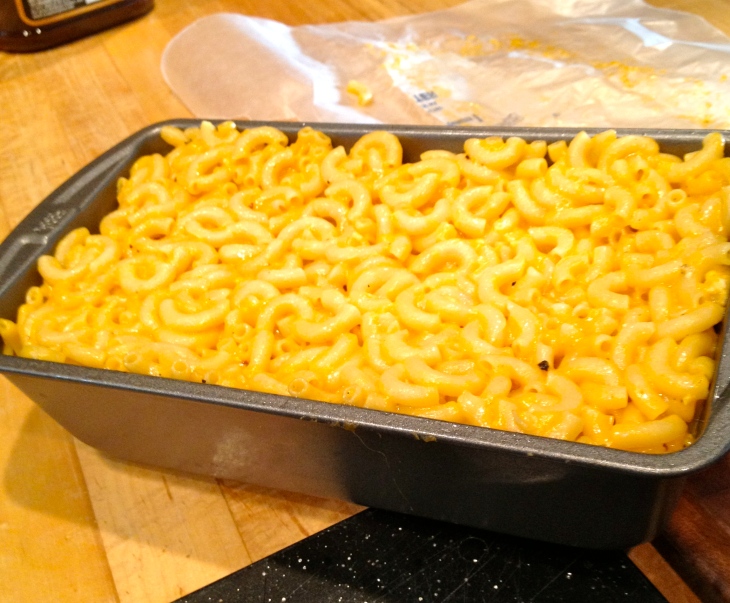 On my sourdough bread outsides I buttered well put one slice on grill pan, 1 slice cheddar cheese, a mound of pork mixed generously with the BBQ sauce and a slice of the cooled Mac-n-Cheese.Top with other slice of buttered sourdough and grilling to perfection.Pressing down as grilling so it will melt together. You could also use your Panini Maker if you have one, just don’t want to press down to hard so everything squashes out. I know you get this part!

I’m telling ya, it was YUMMO! I sliced the rest of the Mac-n-Cheese and wrapped individually and stored in freezer for future use.I have never done this freezing part so I am hoping it works.

Also on mine I added some candied jalapeno slices to give it a kick. Hubby cant handle that part so I put a deli pickle slice on his.With or without the pepper and pickles it was an awesome sandwich.

TIP:Mix equal butter and mayo together and spread on the outside of your bread to be grilled. Makes it grill up nicer and adds a little more flavor. I do it when I think about it and it does work nice.

If I had a restaurant this would be on the menu.

View all posts by Melina's Hangout